The Minister of Works and House, Babatunde Fashola, on Wednesday, listed major roads that have been completed by the Federal Government and are ready for commissioning across the nation.

The minister reeled out the names of the roads when he appeared before the House of Representatives Committee on Works to defend the 2022 budget proposal in Abuja.

“The rehabilitation of Nguru-Gashua-Bayamari Road, Section II (Gashua-Bayamari), at length 25.00km,  executed for N6,581,999,666.55. Construction of a two-lane Bridge over the Cross River at the Cameroon-Nigeria Border at Ekok/Mfum, including Approach Roads in Cross River.

Others, according to him, are the rehabilitation of Sokoto-TambuwaI-Jega-Kontagora-Makera Section in Sokoto and Kebbi States, length put at 155km, for N30.45 billion.

According to Fashola, the ministry has about 13,000km of roads and bridges under construction and rehabilitation in 856 contracts, comprising 795 projects and aggregate length of 816.29km of roads and 733.2m of bridges.

These, according to him, have been completed. The minister stated that some of the bridges that were built had not received enough maintenance since they were constructed.

“I was just whispering to the permanent secretary to urgently look at bridges that the bearings have broken and very urgently we must intervene to prevent accidents.

He said to stop such incidents from becoming normal, the ministry would establish a Bridge Maintenance Unit.

Fashola, while harping on the need to employ more personnel, said the ministry would need to engage people and also provide equipment and materials for regular inspection to be undertaken.

“Let me use this opportunity, as you are taking decisions, just be mindful of one or two things that I have said: our work continues to increase but our manpower is not increasing.

“There is the risk then of personnel becoming overwhelmed, it is a real risk and we should avoid it so please bear that in mind.

“Also in terms of our recurrent expenditures, roads being built, bridges being maintained requires people to go and inspect to verify.

He said this would bring consequential recurrent expenditures, either in form of vehicle procurement, maintenance and repairs, cost of travel, fuelling and also stationeries.

“The successes achieved despite the financial constraint is highly commendable and is nothing short of a miracle,” he said.

Policeman Arrested For Allegedly Supplying Guns To Cultists In Anambra 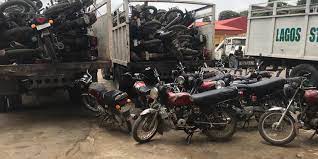