The Bauchi State Government has promised volunteers working in the state’s Primary Healthcare Centres (PHCs) that they will be permanently employed as health workers as part of its efforts to improve primary healthcare services in the state.

Bala Mohammed, the state governor, who gave the assurance yesterday at the Urban Maternity Health Care Centre in Azare as part of the ongoing inspection of projects across the state, said the state government will free resources and hire volunteers very soon.

He noted that upgrading primary healthcare centres in the state is an intervention where the state government has used its counterpart funding to meet the health needs of the state, particularly for women and children.

The governor said under the primary health care development agency, the state government is expending more than N1 billion monthly, but many of the permanent health staff do not turn up for work while the real workers are the volunteers.

According to him, “I am very happy with the volunteers here because of the work you are doing, but where are the permanent workers? It is because of manipulations that we cannot get it right. So I urge you to continue to exercise patience, very soon, we will ensure that you are fully employed.

“We are going to free resources and are going to employ those that will be employed, and when we are not going to employ friends of political associates. We will put the plan that you are going to compete for the available vacancies. Very soon, we want to normalise your salaries because we are eager to remove ghost workers from our system as some people are innocently suffering.”

“You can see that under the deputy governor of the state, we are doing so much to ensure that we form a committee under him to ensure that all of these issues of worker wages are resolved within one month,” he added. 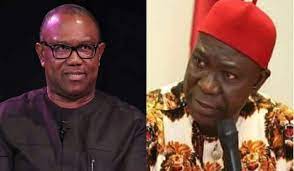