Obama who has been listening to lots of musicals in the past few months and also had his ears on varieties of sounds took to his verified Twitter page to list his favourite songs and summer playlist for the year 2020.

Wizkid a popular international Nigerian artist made the list with SMILE, where he featured HER.
Many Nigerians and twitter users most especially his fans are already giving it to Wizkid for making the list the former world leader.

Barack Obama’s tweet reads:
Over the past few months, I’ve spent a lot of time listening to music with my family. I wanted to share some of my favourites from the summer—including songs from some of the artists at this week’s @DemConvention. Hope you enjoy it”, the tweet reads.
Obama further posted all his favourite summer playlist arts and his favourite tracks. 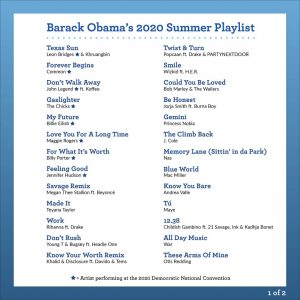 ‘US Travel Bans’ Over Covid-19 Stands! US Capitol Hill Protest: One killed in electoral violence US Election: Legal bid to get Pence to overturn results failed